Tiergarten means ‘animal garden’, it is the name of a large park in Berlin.

In the 16thcentury the elector of Brandenburg put animals in the then fenced off forest for hunting. That soon changed as the park became an area for people and slowly statues were placed there ( some of animals). After WWII Tiergarten was used to store coal and grow food under British occupation.

Now it is back to being a place for wild animals and people. Nightingales have left London over the past decade to come to Tiergarten ( and other areas like this) as it offers a safe haven for them to breed. It is an enormous park with monumental statues scattered around and lots of scrub to  hide in.

The exhibition has animal garden as its theme. You will be surrounded by images of animals or inspired by them.

For Hiske, animals have been a popular theme in her art from a very early age in the Netherlands where she is from and grew up. Now she spends half her time between Europe ( based in Berlin) and Sydney.

Having been born in Germany and emigrating here to Australia with her parents in the 1970s, the theme of Tiergarten, German for ‘Animal Garden’ and also well known

as a huge park in Berlin and the home of that city’s zoological gardens, naturally appealed greatly to Nicole, whose work has, for a long time, been concerned with the

treatment and plight of animals, particularly that of native Australian animals.  An exhibition wholly centred around the theme of animals has allowed her to continue to explore this subject, this time in a deeply personal way, having the opportunity to relate aspects of her own life spent with dingoes.

For this new group show, Nicole has included pieces from a variety of mediums; etching, drawing, photographic installation and digital media. Nicole feels greatly privileged to have spent many years now living with dingoes and it is this experience which forms the backdrop of her work in Tiergarten. Recently she has adopted two rescue dingoes, Juno & Silke, both of whom have given her endless joy and served as the primary inspiration for this current body of work.

Nicole’s pieces, which are both lighthearted and playful in their turn, seek to counter the more often than not, negative portrayal popularised in the media, of this unique creature.  This irresponsible reportage she believes has led to one of our most iconic animals being largely misunderstood and demonised within the Australian psyche, her work instead offers a more balanced and positive view of this complex native animal within a personal and domestic context.

When I was invited to exhibit with Nicole and Hiske I was intrigued. I was in the middle of working on my ongoing series titled Paralands-. a series of work using the idea of hidden paradises found in unusual places -drawings are made from urban parklands,nature-­‐ strips and gardens that are then manipulated digitally and printed.

Macy our Staffy x Border Collie came to live with us last year and I thought it would give me a chance to include her form in my garden images for the show at Sheffer Gallery. The idea of Tiergarten and my usual body of work didn’t seem so far removed. My Macy in Tiergartenseries aims to re-create the idea of a hidden playspace- whether intellectually or real- into a patterned wonderland using dogs as the underpinning form. The series is a celebration of animals (dogs) as a simple, uncomplicated motif immersed in patterns which could suggest truth, honesty and a spiritual sense of well being.

Many cultures have used the Dog as a form which symbolized guidance, protection, loyalty, fidelity, faithfulness, alertness and love. The Greeks used the three headed Cerberus as the guardian of the dead. Or there is the Norse Garmr- the dog that stands at the gates of the underworld. Garmr will only howl if the end of the world is imminent.

In Tarot dogs symbolise communication, friendship and community, animals teach us, about unconventional communication. They remind us of the varied languages available to us for expression-  psychic, body language, music, symbolic and visual.

Lorna has held numerous solo exhibitions including at the infamous Tailor Room Gallery, Sydney in 1998 – 2003, at Peloton Gallery in 2005, 2009 and 2011; at MOP Projects in 2013 and at AIRspace Projects Inc in 2017 and 2018. Other galleries where her work has been shown include, Imperial Slacks, Herringbone, SNO, Phatspace, Zitlip, Sheffer, UTS Gallery and Firstdraft. Lorna’s work has been selected for the Portia Geach Memorial Prize, The Fisher’s Ghost Open Award, Mosman Art Prize and the Liverpool Art Prize. Most recently her work was shown at the MCA Artbar, curated by Anney Bounpraseth as digital projections in February 2018.

In her independent curatorial practice Lorna co-curated ‘Here is a Fresh Egg’, as part of a collective in Zitlip Gallery, 1994 and curated Homefront at Sheffer Gallery, Sydney in 2010 and The Baker’s Dozen at UTS Gallery, Sydney in 2012. Prior to this her time was spent in London, 1987-­‐1993,initiating community arts groups,including the Dolehouse, Peckham, London and ScarecrowTiggy-­‐an artist run co-­‐ operative in Camberwell, London. She is a graduate of both Sydney College  of the  Arts (BVA, Honours, and MVA), The National Art School, Sydney (Dip F A) and Art & Design, UNSW  (Grad Cert Design2014).

Lorna is currently the A/Head teacher of the Ceramic Design Studio, Gymea, TAFENSW and visual art teacher at Campbelltown, TAFENSW 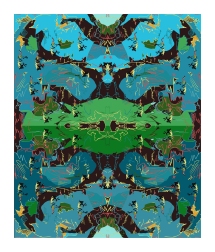 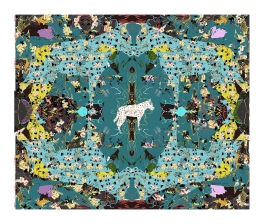 ‘Dusty Pink Tree Limbs’ reflects my series of work titled Paralands. Paralands is an imaginary word, stemming from the amalgamation of paradise and landscape. This painting in particular was originally inspired from a secret garden found in a housing estate. My paintings aim to reclaim the hand-­‐made, turning the digital into a personal gesture.

SUMMER
‘No one can help me now’. Mary sat by the rock, swept up in the light and earth and wind; she carried on, staring at time moving, she tried not to think about space, spacelessness and timelessness. The gap wherein she sat, not doing, not washing, not eating, not cleaning, not working, not scrolling or talking, nor being busy.

Rustle, a thin line, a curved shape, the building of an imaginary moment, not real, working in order not to work; beauty, structure, scaffold, light, colour.

These paintings were made in Summer 2018 in a place a long distance from the city. They are regarded as preliminary works, experimental, and act as sketches (like photographs) for other ideas. They’ve not been shown before. 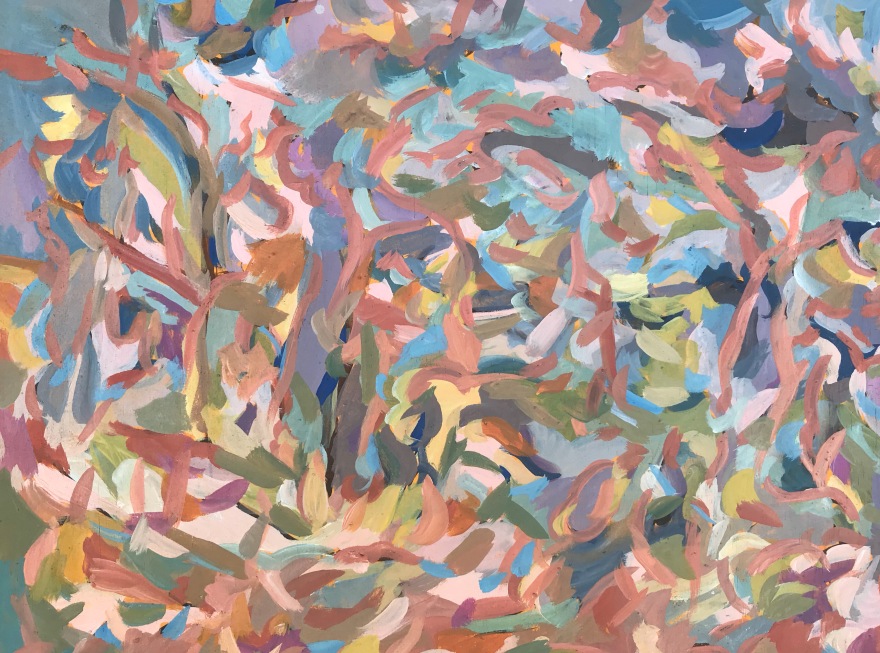 Posted on July 2, 2017April 5, 2018 Posted in Exhibitions, UncategorizedLeave a comment

WEAVE represents Grear’s new body of work. She uses the space of landscape as a starting point for abstractions. The finished works inevitably evolve into images beyond landscape, signifying personal, emotional or social events.

Grear states, ‘Landscape offers me a rhythmic structure where I can play within the imaginative constructs of painting at the same time offering a connection with nature. Colour, form, line, texture and pattern give me so many possibilities to create different compositions. The narrative is not obvious; I like to think of the paintings as thoughts or feelings.

Uncanny, random or specific references do enter the works. After the musician Prince died, I made many purple works with a haphazard rhythm. ‘Big Foot Monster’s is one of these. When Donald Trump was elected I made a work entitled Trump’s Bloodshed- with a grand old oak splitting the composition in two. The large painting; ‘Peppermint Tree’ uses this structure. Sometimes the trigger is public and at other times the impulse to make the work is unknown, it could be based in human identity.

Recently I’ve been listening to John Coltrane. In his music there’s an expression of feeling and meaning that implies rather than tells. The odd note there, a beat here, the fluid rhythm staggered by a loud vibration…

I’m always searching for that pivotal moment in painting where the structure balances the rhythm and where the feeling and the composition weave together’.  Lorna Grear June 2017

Lorna Grear is a Sydney based artist who uses paintings, collages and sculptural relief works to emphasise ideas of process, order and the painterly sensation. Recently her abstract work involves convoluted patterns and structures which signify contemporary virtual and real environments or states of the mind. Most of the time the works respond to current affairs, personal travel or emotional experiences which influence or inspire the need for Lorna to respond with a visual work.

This latest body of work exist as digital prints, paintings and drawings. The digital works start as hand drawings of her surroundings then manipulated digitally; sometimes they are seen as wallpapers- other times they hang individually as large paper works.

The paintings stem from the hand-made drawings and the digital prints working as sketches for the paintings. It’s a master painting relationship.

Lorna has held numerous solo exhibitions including at the infamous Tailor Room Gallery, Sydney in 1998 – 2003 under the director, Lee Frost, Peloton Gallery in 2005, 2009, 2011 and MOP Projects in 2013. Her recent solo show is held at Airspace Projects, Marrickville, July 2017. Her work has been shown at; Imperial Slacks, Herringbone, SNO, Phatspace, Zitlip, Sheffer Gallery, Campbelltown Arts Centre, UTS Gallery, NAS and Firstdraft. Lorna’s work has been selected as a finalist for the Portia Geach Memorial Prize, The Fisher’s Ghost Open Award, Mosman Art Prize and the Liverpool Art Prize.

In her independent curatorial practice Lorna co- curated Here is a Fresh Egg, as part of a collective in Zitlip Gallery, 1994 and curated Homefront at Sheffer Gallery, Sydney in 2010 and The Baker’s Dozen at UTS Gallery, Sydney in 2012. Prior to this her time was spent in London, 1987- 1993, initiating community arts groups within the London squat scene, including Scarecrow Tiggy- an artist run co-operative in Camberwell, London with fellow artists Belle Tidswell and Jane Waudby. She is a graduate of three art universities in Sydney; Sydney College of the Arts (BVA, 1st class Honours, and MVA), The National Art School, Sydney ( Dip F A) and Art & Design, UNSW ( Post Grad Cert Design 2014). She currently teaches painting and art history at TAFE NSW, Campbelltown College.

The Cranny, Kiss Them While They’re Sleeping; Marion Abboud

Open Thursday to Friday 11.00 – 6.00 and Saturday 11.00 – 5.00 the first three weeks of each month. Check the Airspace blog for special events, exhibition previews and any scheduling changes.

Catalogue to be published soon. 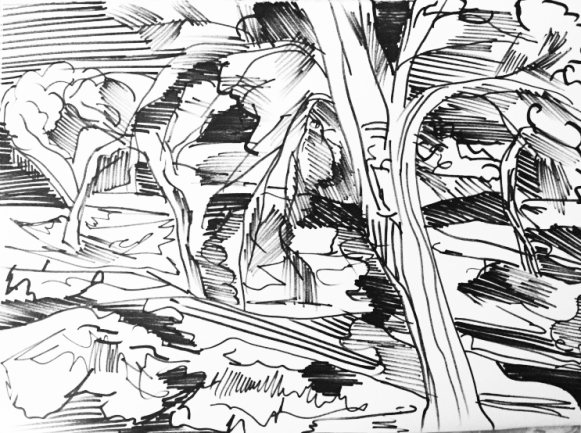 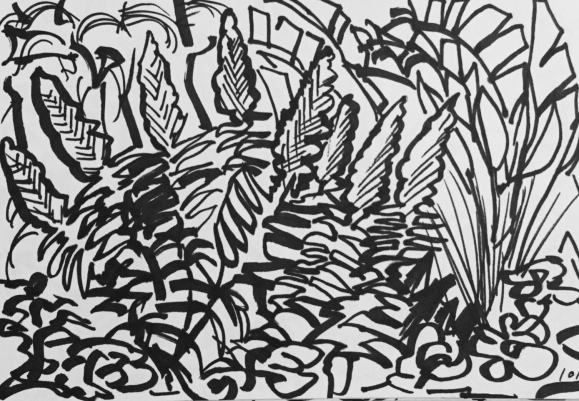 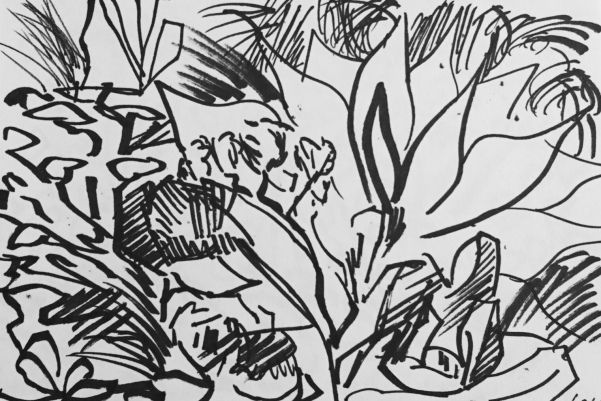 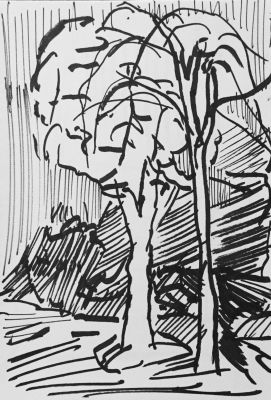 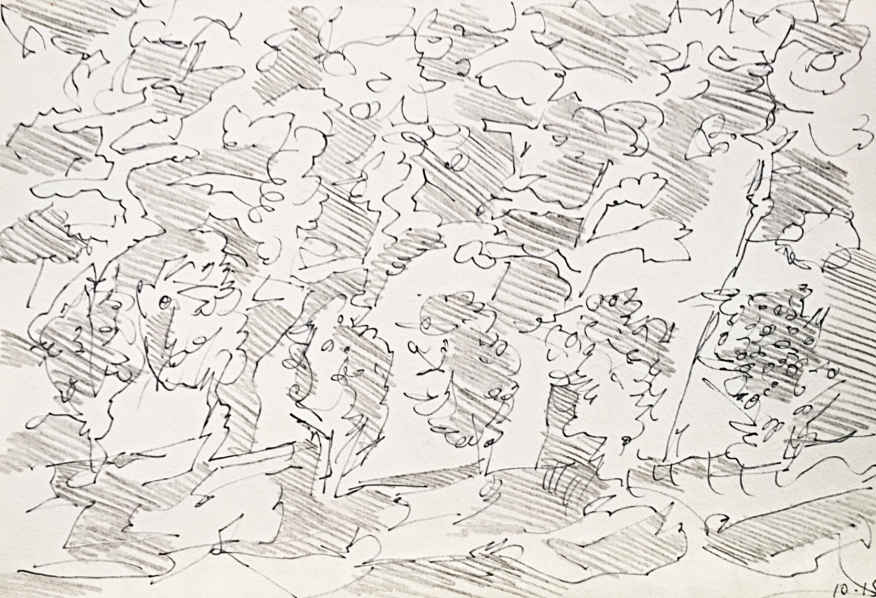