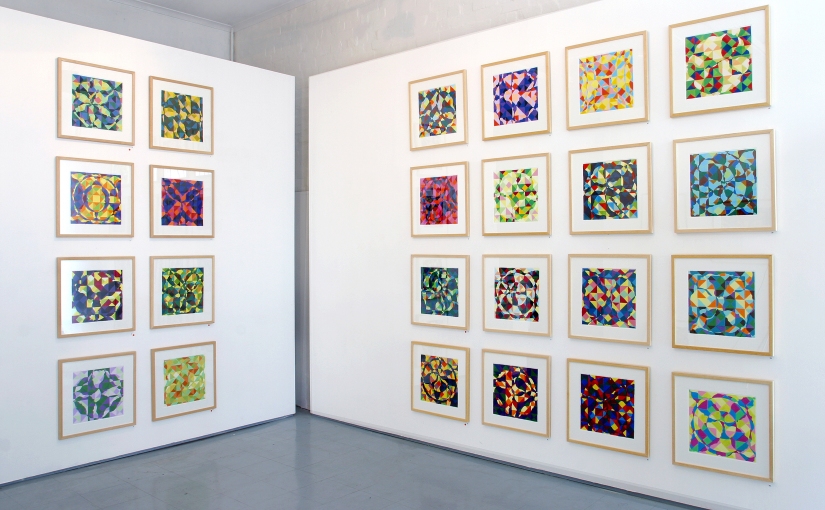 Lorna Grear’s exhibition at Peloton is an eclectic collection of work. Titles such as Puzzle pictures, New World Order Maps, Mac Pacs and History paintings are on display together held under the theme of CATCH; alluring to a game of tag.

Her Puzzle pictures utilize children’s toys as solutions to problems of form and space. These works on paper use the shape of the play object as the next layer in the pattern of abstraction. Underlying layers reference, the grid, geometric abstraction, text and a found circle. The solution of these puzzle paintings is to find a point at which these various forms interplay and connect.

The New World Order Maps reclaim the cliché title, making reference to world maps, abstract thought and visual conundrums. Small in size these complex paintings blend the irrational with logic, structure with openness. Colour is the lynchpin which holds the works together.

The ‘Mac Pacs’ and ‘Automated cutouts’ are a nod to the readymade. Paraphernalia is gathered from Mac Books, cardboard packaging and discarded stencils from 3D assembly toys. Lorna makes aesthetic objects out of stuff we usually throw away keeping in mind art histories such as minimalism and constructivism. In this series re-occurring ideas are played out. The packaging has become an aesthetic material used as the basis for the image. The discarded stencil is painted and becomes the layer in a relief work.

The bigger paintings surmise all this into singular images. These paintings reference iconic 18th century paintings re fashioned into flag like images. In ‘Swirling Bungaree’ the silhouette of the Aboriginal tracker named Bungaree is used as a heroic symbol of a ‘welcoming native’, repositioned in an op art mandala. In another painting, ‘Liberty and Gavroche’; Delacroix’s leading lady appears in transparent red. Her silhouette is positioned as a rambling pattern climbing to the top of the picture plane.

These paintings tease out ideas of world change through revolution and discovery. They offer a contradictory image; on one hand an objective political understanding of power and on the other; a spiritual independence from rationality.

However disperse this collection seems, there is a strong connection between the works. An indefinable space is repeated, a purely visual space where the foreground tries to weave itself behind the picture plane. The space within these works strengthens the paradox between creating an illusion of a figurative 3-dimensional space and the plastic formal space of flatness.

Lorna states that the illusion of 3 dimensions isn’t what interests her.

‘It is much more interesting to complicate the equation and make flatness more compelling. Whilst creating an image I try to add more and more to the structure whilst all the time allowing each layer to have its position in the foreground.’

…The overall interplay between the various and often opposing elements is integral to the painting.

Each layer builds upon a personal iconography. The grid references academia, the found circle- movement and letters being the language in a child’s life. The latest works collect ideas from art history, flirting with notions of liberty and revolution.

Lorna’s work has expanded to include a range of influences; these influences traverse time, place and concept. To borrow Nicolas Bourriaud’s words,
‘Artists are responding to a new globalised perception. They traverse a cultural landscape saturated with signs and create new pathways between multiple formats of expression and communication.’[1]

Initially seen as disparate, these works relate through a complex understanding of narratives. The discarded object, child’s play, ideas of liberty and the use of the found image build an image of a globalised state of culture.  The debris from society, the forgotten images from art history and the use of amusement objects are used in paintings to construct convoluted spaces and intricate patterns; they invoke a multiplicity of meaning. Lorna’s work is as much a metaphor for our collective contemporary psyche as they are journeys in a compelling and complex space.